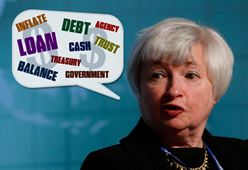 We previously created a post mentioning Janet Yellen’s approach to the Federal Reserve Chair seat. Leading up to her final approval, there was much controversy among members of both leading U.S. political parties as to her suitability and how she will impact the financial world.

On January 6, 2014, the U.S. Senate voted 56-26 to confirm Yellen as Bernanke’s replacement. Bernanke, best known for his attempts to lead the U.S. out of the 2008 financial crisis and recession, sees his eight-year term expire January 31, 2014. Yellen will officially take his place on February 1. Since October of 2010, Yellen has been the Fed’s vice chairwoman. Bernanke’s advice to Yellen is to listen to listen to and regard Congress as her boss. As for financial market impact due to the switchover, there is expected to be little reaction because Yellen and Bernanke have been allies.

Yellen is expected to stay the course set by Bernanke as the economy continues to recover. Her biggest obstacle may be the management of the Fed’s quantitative easing. Quantitative easing refers to the Fed’s mass buying of Treasury and mortgage bonds in an effort to keep long-term interest rates low, thus energizing the economy. Economic experts believe this massive collection of assets acquired by the Fed has served its purpose and now must be unwound. Under Yellen, the Fed will be looking to stop the quantitative easing program and tighten up the balance sheet without causing problematic waves in financial markets and the economy.

Republicans and Democrats alike have criticized the central bank for its efforts in restarting the economy and its regulation of Wall Street. Republicans are concerned about Yellen causing an inflation spike due to her “easy-money” policies. They would like to establish an “oversight project” to put the Fed under a microscope for at least a year. From which, they can draw conclusions and pass bills to regulate the Fed’s operations. Democrats argue Yellen is the best suited individual for the position at this time and that Obama made the correct choice.

What do you expect to happen when Yellen officially takes over?