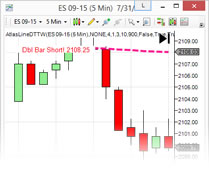 The E-mini S&P, also called S&P E-mini, or simply E-mini, is an index futures security offered by the CME Group and regulated by the CME (Chicago Mercantile Exchange). The E-mini is considered a benchmark of US stock market performance because it consists of various Standard and Poor’s 500 large-cap stocks. On the news, you may see the S&P and wonder how it’s related to the E-mini. Essentially, the E-mini is 1/5 the full S&P that you see on the news. As a futures market, E-mini contracts expire every three months. A new contract is then traded.

Why do people trade the E-mini?

The smallest increment on an E-mini chart is called a tick. Each tick is worth $12.50. There are four ticks to a point. Therefore, a point is worth $50. Brokers typically charge less than $5.00 to execute (in and out, also called “round-turn”) each trade. This $5.00 is multiplied by the number of futures contracts being traded. Putting this all together, if you trade one contract and make a profit of 16 ticks, this equates to 4 points, or $200. Since this is one contract, your broker will take about $5.00 from that trade, so you’re left with $195. If you trade two contracts, your profit is $400 before commissions and $390 after commissions. Remember that contracts act as a multiplier.

The E-mini consists of quarterly contracts: March (ESH), June (ESM), September (ESU), and December (ESZ). Some trading platforms, such as NinjaTrader omit the contract month and denote the numerical month value instead. For example, the March contract becomes ES 03-15. On platforms like TradeStation, a trader can specify @ES to monitor price over all contract periods without having to “roll over” to a different period.
Other popular futures markets include the DOW (YM) NASDAQ (NW) and the Russell (TF).

At Day Trade to Win, we focus on intraday trading, which means we look for trades from market open to market close. We do not typically hold positions overnight, and this should certainly be the case for any traders who are trading on margin. In most cases, we hold trades no longer than 20 minutes. We are out of a trade sooner if we make profit via price hitting our profit target or if a stop loss is hit. A stop loss is a safety net price from which you will exit at a loss if price reaches it before hitting your profit target. Our stop loss and profit targets are mostly dynamic and based on market movement. Our trading methods make sense because we trade based on what a given marked can realistically provide.