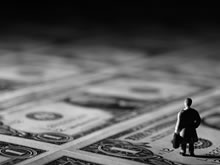 It’s not October yet, but here are two scary (but true) trading stories for your reading pleasure.  Leave the lights on while reading.

There was once a CME floor trader named Dan Sullivan.  Dan made a living by buying and selling derivatives based on LIBOR interest rates.   One day in 2008, Dan received a text message indicating that Lehman’s was going under.  Based on his position in the markets, Dan expected to make a million dollars when the new LIBOR numbers were announced the next day.  He was confident in assuming profit because he knew how the LIBOR figure was used and how this tied into a likely Lehman collapse.  What happened the next day?  The LIBOR number hardly changed.  Dan was very confused.  It became clear to him that the banks lied about the number.  In fact, many traders besides Dan are suing because of the alleged deception.

A Wall Street Journal report and well-respected author of trading books, Scott Patterson, was recently interviewed on NPR.  Scott claims that HFT (high frequency trading) accounts for up to 70% of all electronic trading today.  He also believes HFT creates a significant amount of liquidity that the markets are now dependent on.  His main concern with HFT is lack of regulation due to the FCC and CTFC being unable to monitor the quantities of fast paced orders.  He says the regulatory shortcomings result from a lack of funding and computing resources.  This is all outlined in Scott’s Dark Pools book.

If you ever have a chance, Google “splash crash.”  Hypothetically, let’s say Greece defaults.  This sends shockwaves through the trading world in an instant.  HFT reacts immediately and immediately change positions or (more likely) pull out as a cautionary measure.  All of a sudden, the liquidity backbone is drained.  The markets grind to a halt.  Do you considering this type of crash a likely scenario?  If so, how can the regulatory agencies prevent this from happening?  Do they say HFT robots cannot pull out during a crisis?  Do they cancel trades?  Is this fair?  Is the answer in technology?  Is this to be expected with the virtualization of world currency?  One thing is for certain, monitoring HFT is a massive and complex issue.

At least you can get a little peace of mind by downloading our free news indicator for NinjaTrader to stay out of the known news events.