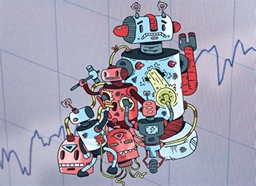 • A University of Miami research paper published in September 2013 indicates that between January 2006 to February 2011, more than 18,000 spikes and crashes occurred in individual stock prices as a result of HFT.  These spikes and crashes raised and dropped a stock’s value by almost up to 100% in many cases.  Since these trades occur in under a second, they go unnoticed by human traders.  The stocks with the most up and down spikes belong to Morgan Stanley, Goldman Sachs, Wells Fargo, J. P. Morgan, Bank of America, and Lehman Brothers before the 2008 US financial crisis.

• HFT algorithms, or robots, work together in raising and dropping prices.  Others flat-out compete with one another.

• The counterargument for the need of HFT is that such activity creates volatility, which is good for trading. Italy was the first country to pass tax legislation specifically for curbing HFT.  An argument against HFT is that regular human traders do not stand a chance.  Experts are concerned HFT trading can be manipulated for cyberwarfare.

• Professor Neil Johnson, a researcher in the field of finance, would like to devise an environment that mimics the market. By doing so, he believes he can learn how to stay one step ahead of HFT.