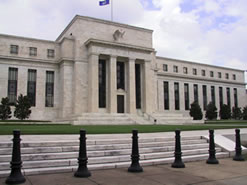 At Day Trade to Win, we always advise traders to watch out for major news events.  When significant news occurs (either scheduled or unscheduled), the markets can react harshly, either positively or negatively.  In most cases, we recommend staying out of the market until volatility subsides.  But what about the big players who know what the news announcement is going to be?

We’ve speculated before about the people who are behind the news events – the people who know what the facts and figures will be (jobless claims, Fed announcements, retail sales, etc.).  Although illegal, it is possible for these big players to position themselves in the market AHEAD of time in order to make some big money.  According to Mother Jones, this is exactly what happened on September 18, 2013.

On September 18 at 2:00 p.m., the Fed announced that its bondy buying program would not be tapered.  Within three milliseconds, several huge orders were placed in Chicago exchanges based on the Fed’s decision.  These orders were undoubtedly placed by a high frequency trading algorithm (a computer code that watches the markets and places orders much more quickly than human traders).  Long story short, it is a mystery how these seemingly very intentional orders could have been placed so quickly based on the news.  Reporters who are aware of news announcements ahead of time are kept in a secured room.  The orders also seemed to have been placed too quickly based on the location of the order origin, the exchange, and our current fiber optic technology.

“The general basis behind the strategy is the law of large numbers. Bet on a coin flip with a 51% edge one time and you still have a lot of risk of losing. Bet on 10,000 of those coin flips and you’re almost guaranteed to make money. Same principles apply. Take a very large number of small, but uncorrelated, bets with a tiny “edge”. Each individual bet is risky, but the overall strategy becomes remarkably stable. A decent HFT shop will rarely if ever have a month where they lose money, a really good one will hardly ever have a day where they lose money.

So, what’s the catch? The size of the strategy becomes capped. An “ordinary” investor like Warren Buffet might take a bet on a company like Coke, and hold it for years. If you have a ton of money like Buffet you can’t just go and buy a bunch of stock instantly. You have to slowly build up your position over time or you’ll move the price up too quickly and end up over-paying. This isn’t that big a deal for Buffet because he has years to get into Coke. But our high-frequency trader only has about a second to get into a stock. The amount of stock you can buy (or sell) in a second (at a reasonable price) is pretty small. Even for a very large company like Microsoft, you might be able to buy 5000 shares or $150,000 worse at a good clip. Your signal probably only expects to make $0.002 or less from your trade, so that means at most you can only make $10 on that bet.

Now you’re making a lot of bets and they do add up, but at the end of the day each one is inherently limited. So you run up against a wall of how much money you can make doing it. A longer-investor like Warren Buffet doesn’t hit this wall in the same way you do. (Ironically you see many successful HFT firms try to become “longer-frequency” to bypass their size limitations). Against that revenue your expenses are high. You have to pay for a lot of computers, expensive data, exchange fees and talented people. None of those things come cheap. Sometimes even if you’re never losing money trading, you end up paying out more in other expenses than you make.

Finally, why do high-frequency traders care so damn much about cutting down their latency to microseconds? All these HFT firms are running variants of the same basic strategies that have been around since the beginning of the industry. There’s only so many ways you can trade in a way that truly changes directions on the order of seconds. For example value investors like Warren Buffet likes to look at financial statements. That doesn’t work for HFT because financial statements only come out once every few months. You need some sort of input that varies on the order of seconds and affects the stock price. And at the end of the day there’s not really that many things that fit the bill.

Consequently almost every HFT shop out there are all looking at pretty much the same things and all have models that look pretty similar. So chances are when you see a trading opportunity so do your competitors. And since the opportunities are so small and everyone’s against their size limit, the first trader to “reach” the opportunity is going to take everything available. So you build low-latency systems to try to get to the market before your competitors, and they do the same to you.

In the early days of HFT firms would try to get all kinds of advantages, sometimes even paying extra to drill through walls to get their cabling shorter to the exchange. Nowadays that’s pretty much gone, because the exchanges want to promote equal access. This makes sense from the perspective of the exchange. One, they sub-lease cabinets in their data center, so guaranteeing that everyone has equal access if they lease from them means they can charge higher rates.

Two the exchanges would rather have HFT focus more effort in improving their algorithms than their time to trade. More sophisticated algorithms usually mean tighter spreads, faster responses, higher liquidity. All of that tends to leads to more trading happening. Since the exchanges make most of their money by charging a small fee on every trade that leads to a better bottom line. By alleviating the concerns about someone else having preferential access, it promotes a lot more overall activity.

Most HFT firms are structured as proprietary trading operations. Meaning that they only invest the money of their employees and principals. This is generally because they are limited by their trading capacity. A long-term investor like Warren Buffet can invest other people’s money and charge them a management fee for the service. Because of his high capacity there’s enough room for billions of his own money and other’s.

Even the big hedge funds that do HFT, like Citadel and Renaissance, structure their HFT activities into separate funds that are only investable to employees and owners of the firm. So generally regular people won’t get the chance to invest in HFT no matter how much money they have. The one exception might be if you make a seed investment in a startup operation, but needless to say that’s a lot more risky than investing with an ongoing firm.

Other than that if you see somewhere offering to invest your money in HFT strategies it’s almost always at best mis-marketing and at worst outright fraud.”

What do you think – is high frequency trading fair? Does it benefit the economy at all?