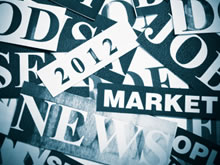 As expected, the first trading day of 2012 opened with a bang. The E-Mini S&P 500 (ES) opened near the 1273 mark and rallied approximately four points to 1277. A brief period of tumble turned in to another rally by 10:00 a.m., with price moving within a five point range in just eight minutes. This quick action was the result of the ISM Manufacturing Index report, indicating a solid economic growth rate as related to ISM’s surveyed 300 manufacturing firms. The ISM Manufacturing Index for December 2011 reached the highest level in five prior consecutive months. The report was interpreted positively, although we at Day Trade to Win can attest that positive news does not always indicate a bullish market (with the inverse also true in terms of uncertainty).

As stated by Bloomberg News, “The S&P 500 has rallied 14 percent from last year’s lowest level on Oct. 3 as better-than-estimated economic data fueled optimism the world’s largest economy can shrug off concern over Europe’s sovereign-debt crisis. The gauge still recorded its first annual decline since 2008 last year.”

While much of this economic news reflects positive, speculative feels regarding manufacturing growth in India, China and Germany, investors highly regard the U.S. commercial real estate market. Real Capital Analytics released preliminary figures indicating that the U.S. was only second behind the UK in attracting cross-border investment in 2011. This means the U.S. will remain a top choice for global commercial real estate investors in 2012. Multifamily apartment buildings topped the list for U.S. investors. In addition to the U.S., Brazil’s real estate growth opportunities are closely monitored by investors. For example, Sao Paulo jumped from 26th to fourth best city in the world for real estate investment (speculative) in 2012.

John Paul’s take on 2012: “my prediction places the stock market up at the conclusion of 2012 as money flows into the U.S. However, it will not be pretty for the U.S. if Europe’s economy incurs major volatility. The resulting swings, as they would affect us traders, would be of great magnitude. Real estate, on the other hand, is a safe-bet investment for a long-term hold – especially apartment complexes and the like in the case of a recessive economy. I would exit all gold positions as this is now the time to sell and move on.”

Let us know what you think…

2. At the present moment, do you think we are better positioned to tackle the Eurozone debt issues as compared to this time last year?

3. What role does real estate play in influencing the way you trade, if at all?