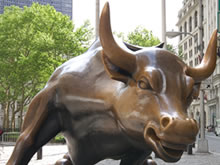 I (John Paul) may not have a crystal ball, but I have a prediction of where 2012 will end up. How can I be so sure? Although you may follow my real-tme price action methods of day trading, know that historical analysis has played a major role in my trading career. Most traders are unaware of one strategy in particular that relates to the month of January. Going back in history, you can verify that the first month of the year is an accurate predictor of how the year will end (up or down) in the E-Mini and related indices. As an example, the last day of trading in January 2012 closed higher as compared to the opening price on January 3, 2012. This gives us a strong indication that 2012 will end higher (in December) as a bullish year because of January’s activity.

How can you take advantage of this? You can buy the December contract right now. You can buy options far into the future. You can even buy the cash market and sit on it. Analysts use this method every year as part of their strategies.

Another forecasting method that most traders are unaware of is that every year ending in a 5 is a bullish year for financials. You can verify this by going back in history to the early 1900s. Without fail, a bullish year occurs when the last digit ends in with a 5. Without requiring advanced mathematics, the next year this is expected to occur is 2015.